If time is a construct... 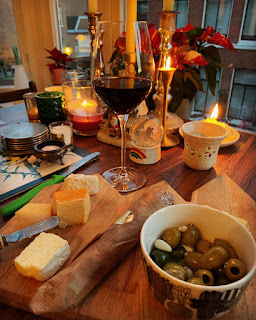 I'm a big fan of New Years Resolutions. One year I made a very extravagant list and managed to check off every single box. Though it came down to the wire with "get a new job" being ticked on the 21st of December. Skin of my teeth as it were. At any rate I've been pondering what will make it's way to the list this year. Someone in one of my fave FB groups {I loathe Facebook, but love the camaraderie} posted about what a shit year 2021 was and what were people planning as a way to cleanse themselves of the bad juju.  And I've been enjoying the responses. A number of people suggested writing down all the shit that transpired in 2021 and tossing it into the fire. As a fireplace haver, I will most certainly be doing this. Other were going for a run with friends on Jan 1. An idea which I cottoned to immediately. Screw getting blitzed for no good reason on 31 only to wake up in the new year bleary eyed and queasy. I am determined to start the year on a good note. Perhaps the most revealing and thought provoking comment came from a woman who started by explaining that time was merely a construct and therefore if we were only willing to grasp this fact this conversation would be moot.

I found this somehow hilarious. Like because science has figured out a theory on this; your anxieties, desires, rituals, hopes and despair are pointless! I mean... Explaining something in scientific or philosophical terms does not make it irrelevant. It just means you're a smarty pants who's all IQ and no EQ. Boooooring. Take that "does not compute" attitude elsewhere, Small Wonder! It got rather heated when the author of the post responded that while she agreed about "time", she was merely asking for questions and solidarity. She finished her response with a "Best of luck with your history major!" To which the Timeless Beet Bot 2000 very nearly short circuited.

I thought about that exchange a bit. Particularly how within a commiserating, friendly and lively chat with over 100 respondents, there could still be one lone bitter, angry troll spreading xmas dung over the freshly fallen snow. I mean why? Part of me wanted to ask her to take a beat and pour herself a stiff 'nog. But I doubt that would have smoothed those ruffled feathers. So the other part of me actually racked my brain for what would be the right thing to say to diffuse the situation and give this character some of the comfort and kindness it seemed like she could use. Honestly I came up empty. How does one respond to unwarranted vitriol? And how do we bridge the gap with those that seem to be utterly belligerent and obtuse? Is there any point to even trying? I don't know the answers to these questions, but I know I'm going to add empathy and patience to my resolutions. ADHD is a real MF when it comes to composure and tempering irritation. But I'm nothing if not a determined little bee. I've been working on this kindness and empathy jam pretty intensely this past year and in some ways I think I've turned a corner. I read somewhere that it's not the first thought in your heard that counts, it's the second. So like if some bozo nearly knocks you down with his bike while riding on the sidewalk. It's not the "Go fuck yourself!" and middle finger you offer up in the heat of the moment but more the "Man that loser must have somewhere to get to quick" that illuminates where the heart is at. I jest. But yeah even I can't find a silver lining to the batshit code of ethics that the average Dutch cyclist subscribes to.

But I digress. My resolutions this year will be a 2-parter. I'm going to take the 31st as a day to cleanse, freshen all the linens, air out the house, (no I won't be burning sage and you shouldn't either), vacuum and scrub, and then finish it with a long walk and rumination. Then after I've gotten the cobwebs out physically and metaphorically I'm going to write my list of intentions (that sounds a little nicer than resolutions right?) and pin it somewhere handy. There will be lots of room for kindness to myself and others as well as some space for ambition and self improvement. January 1st I hope to wake up refreshed and ready to take on what 2022 has in store. Time and it's metaphysical (non)properties be damned.