get ready to fall in love... I'm talking about the chairs, fools. Remember when I said here that there were 2 things at DDW that blew my mind? Well this is numero dos. Max Lipsey makes one hell of a chair, or stool. The Acciaio series. He tells me they're inspired by racing bikes. I think they're inspired by awesomeness. The slender tapered powder-coated steel, the perforated leather, and the crayola colors all collide to create a perfect balance and harmony that left me breathless when I encountered them at the show. And...they're actually comfy. No shit. I could go on and on, but really they speak for themselves. Not yet available for consumption [I hear they are on their way to production], you can bet your sweet ass, I'm going to beg, borrow or steel [steel...get it? har har] to get my hands on one...or two or three. Check Max's site out here to see more of his chairs and his other masterful designs.

Oh and he tells me, he'll inform me of any new developments, chair or otherwise. And I, in turn will share with you, my faithful posse. Keep your eye on my man here. I think we can expect some seriously great things from this industrious chap.

If you like the pics, feel free to peruse more of Max, and more of DDW on my flickr.
Posted by savoie at 6:43 PM No comments:

So cool, it's ridiculous.
Posted by savoie at 12:50 AM No comments:

So as many of you know, I spent Dutch Design Week playing volunteer, ahem Gal Friday for the Wunderkinds at the FILM+DESIGN Festival. I had an excellent week and it was due in no small part to the team, their kindness, creative energy, and bitchin' movie selections. They even let me flex my public speaking skills, [which, as you've guessed, rock!] and introduce the films. I got audience applause, not once but twice! I think the Dutchies are starting to take a shine to us exuberant, over-enthusiastic, slap-happy American types.

So here's the skinny on the event:

The FILM+DESIGN Festival is a film festival with a design, art, & architecture slant. It's comprised of collections of short films, talks, and of course, the feature lengths. I saw almost every last film in this festival and one of the talks and must say, I was impressed.

I never go to the movies. Why? Because I nearly always leave with a great sense of disappointment and a feeling of regret for the 10 bux and 2 hours of my life that I will never get back. Seriously, I averaged about a movie a year in NYC and I've only seen one here. And we all know how that cinema fiasco went down. And then in one short week, I watched nearly an entire friggin' festival and loved every minute of it.

How did this happen? You might ask yourself. And here's the answer. The folks over there at the FILM+DESIGN Festival can curate their asses off. They used a discerning eye and impeccable taste to garner a tasteful, thought-provoking, and [thankfully], enjoyable collection of cinematographic delights. This was no slap-dash throw a bunch of drivel together and put a poster on it kind of affair. Yeah Tribeca, I'm talking to you. I volunteered with this bunch because I found out they were screening The Visual Language of Herbert Matter, [which was sinfully good by the way] but I had no idea who or what to expect when I arrived. I found my expectations wildly exceeded.

And I'm not the only one. My BF, a non-designer scientist type, loved the films he saw too. And really, when films about design and art etc. can reach outside of their creative bubbles and pique the interests of the uninitiated, I say hats off to you, because that ain't easy. I'm not at liberty to discuss their upcoming plans, obvs; but there are talks of new cities, new countries, new continents even! I am so thrilled to have been a part and hope to continue to be so in some [even small] way.

So if you haven't checked out the site, please do! If you have, or know of a film that would be perfect for this top-notch event, send me a link in the comments or email me at chateausavoie [at] gmail [dot] com. I have been sanctioned by the powers that be, to look into and pass on any films I deem noteworthy. Also, be sure to check out the Cicada Studio website. These are the creative forces behind FILM+DESIGN and their gorgeous site and blog are assuredly worth a gander.

And finally, I would like to issue a sincere thanks to mes amis over at the Fest. Marijke, Ward, Eva, Rico, and Ger. You were all so kind and made my week so very excellent. Even worth sleeping in a hostel for! Ha.

ps. Most of the pics I took are on the studio's camera, so they've got the files. Here's a couple I got on my phone. Crappy for sure. Don't judge. It was hella dark in there. As we speak I am uploading many albums to flickr of my Dutch Design Week pics. But here's the truth. I liked plenty, loved some and swooned over precisely 2. Lenneke Wispelwey is one of the 2. [more on numero due later] I have been onto her for awhile now through various blogs and keeping an eye on her own site. And it was with great unbridled joy that I happened upon her lovely table at the Klokgebouw in the Strijp-s locale. I had no idea she would be there. DDW is HUGE and as much as I tried to make a proper schedule and map, I was frankly overwhelmed with all the offerings and am sure I missed much. But who cares? I found my gal. She was friendly and sweet. I gave her my card. She gave me hers. And I promised to send her my pics [which I'm about to]. The problem? I'm afraid my pictures just don't do her work justice. Really. So be sure to check out her blog and a couple of cool articles on her here and here. And check out my flickr set too. Maybe you'll like the pics a bit more than I do.

At any rate. I love her work. The faceted ceramics, the playful tone, the somber grays interspersed with plucky blue-greens, reds, and golds. It all convenes to make me a happy onlooker. And when I head back home [in Italy at the moment, more on that later] I will be checking out her goods at my local Lenneke supplier. And hopefully making off with a piece or two.
Posted by savoie at 2:42 PM 1 comment:

I had the good fortune to meet the very talented artist, Wouter Verhoeven, at the FILM + DESIGN Festival. Beautiful work. The light reminds me of the Dutch Masters. Dutch and artistically brilliant. Shocker. 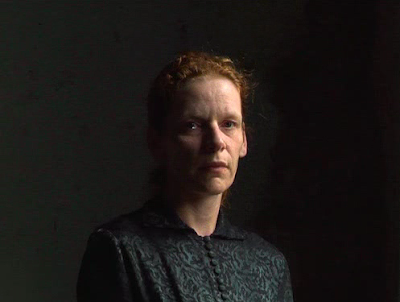 Check out his work on his site... a must. All pictures are the property of Wouter Verhoeven and are used from his site, with permission.
Posted by savoie at 10:41 AM No comments: