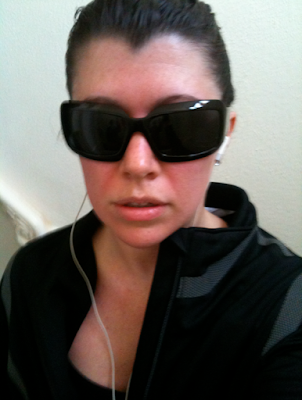 Lately I've been running in the mornings. I've mentioned it here and there. I'm not what anyone would call athletic but after 30 my metabolism took a sad turn and it's been hard nee impossible to keep my 20's physique even while eating boatloads healthier and drinking boatloads less. And I wasn't even skinny in my 20's. So here I am almost 33, a sad stack of jeans, tops, and skirts that I could once fit into, folded very neatly at the bottom of a box in the bottom of my closet. And I am itching to get back into all those damn pairs of $200 jeans. So I run.

But I often have a debate in my head every morning about whether or not I should run. Basically, it's hard, sweaty, and grueling. I do a 3 mile run and I try to beat my time every run which means I'm never allowed to slack. Despite this, logic usually trumps laziness and I run. This morning that tightness in my right shin was starting to feel more like a pull but I kept at it. I have this thing that once I start, I can't stop until the finish line.

Pushing and pushing, not wanting to lose time, huffing and puffing like a beached whale, and assuredly as sweaty as a boxer, and as red as a beet. Stopped momentarily waiting for a light to change, this car slowed by while the passenger stuck his head out. Said head was of the beautiful nee stunning, Dutch, piercing blue eyes, sandy haired variety. Old blue eyes was staring right at me, head out the window, smile like a dog that just found a veal bone. He looked expectantly at me like he wanted to say something or he wanted me to say something. I flashed my mega-watt smile [had braces in my late late 20's and after a lifetime of being known as snaggle am not shy to admit I now have a killer smile] and laughed out loud. He kept on smiling and I ran round the car, did not turn around to see if he was still watching, but I was smiling and damn near sprinting my spirits were so bolstered.

Today I made an all time record and shaved a damn full minute off friday's run. They should have hot guys cheering me on all along my route. I would be killing it for sure! That was my morning inspiration. What's yours?

ps. The running pants ala Stella McCartney, that I'm rewarding myself with for all my hard work. Aren't they bitchin? Check out Adidas' sport gear. It's killer. 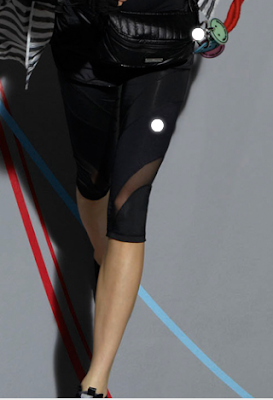 Email ThisBlogThis!Share to TwitterShare to FacebookShare to Pinterest
Labels: fashion, health, the hague